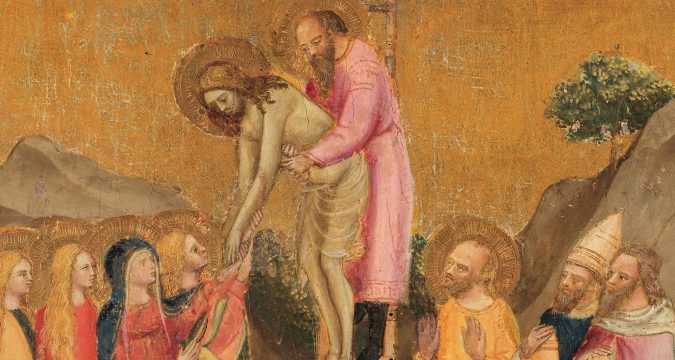 There is a deep irony in this verse, which is read in Christian circles as prophetically anticipating the suffering of Jesus Christ.  On the one hand, the crucifixion of Jesus Christ is one of the most well-known events in history, regardless of whether one follows the Christian faith or not.  Here was an innocent man executed on fabricated charges, caught between the wheels of political expediency and religious protectionism. On the other hand, he was a stunningly silent victim.  The Gospels have preserved only a few phrases of this man during the most intense moments of his suffering, and none of them depict him fighting to make sure this story would be told until the end of the world.  Other parts of the Gospels have lengthy discourses, even sermons from him. By contrast, the Gospel of Luke has Jesus speaking a mere three lines from the cross. The first is a prayer of forgiveness for his persecutors:  “Father, forgive them, for they do not know what they are doing” (Luke 23:34b).  In his second statement, he affirms that the blessed hope of the world to come would include his fellow victim by saying, “Today you will be with me in paradise” (Luke 23:43b).  His final words placed his spirit into the hands of the Father as life itself faded from him. Surely, this was a victim who “did not open his mouth” in anger, bitterness, or spite.

This aspect of Jesus’ suffering attains its fullest relief when we juxtapose it against the background of our cultural values and tendencies.  In our day, a new ethic has arisen demanding that victims’ story be told in order that the suffering of past atrocities and suffering not be lost before the march of time and narratives of “progress.”  The victors of history have been able to write the story in the way they have chosen since the dawn of time, and by telling the suppressed stories we hope to recover the stories of suffering and victimization that were dismissed.  We must, we believe, speak truth to power, and in doing so find our own redemption and do our part to right the injustices of history. This desire to rescue other victims has also birthed in us a desire to make sure others know how we have personally been victimized.  Among warring groups and ideologies there is often a race to be the first to claim the status of victimhood. The one with the martyr mantle wins. In a world where everyone wants to be regarded as the real victim and thus the worthy object of sympathy, Jesus stands as a peculiar outlier.

To be clear, I am not saying that we should reverse course on this cultural tendency and continue suppressing the stories of history’s victims.  The victors of history have rarely stopped to hear the stories from the margins, and I have been guilty of that myself. For most of my life, I operated with an idealistic view of the American story, namely, that we were founded as a refuge for those fleeing religious persecution.  Life, liberty, and the pursuit of happiness were the natural rights of all who lived within our borders. It was only through the gentle reframing of that story by African-Americans and others who helped me see the American story as more complex. Yes, some did immigrate to find a religious asylum as my ancestors did.  Others, however, were confiscated from their homelands and brought here as property, not as humans entitled to life, liberty, and the pursuit of happiness. When they try to trace their family histories, they find their ancestors listed as property in slave deals, not refugees from religious persecution. We need to learn the truth, and the quest for truth will involve hearing stories from the margins that might require a more complex story than the one we’ve adopted.

What then does the example of Jesus speak into this cultural moment?  The point, I think is this, namely, to probe our need to have the world know of our suffering and see whether it is all from the Spirit.  While Jesus saw his death as an integral part of his mission, he did not walk the road to Golgotha making sure the crowds were aware of the injustices of the Roman empire, and that Pilate was nothing more than their marionette.  He did not shout for all to hear, nor was he compelled to defend himself. Content to suffer the ignominy of crucifixion—and let’s not forget that crucifixion for the Romans was not just about torture but about debasing the executed as a public icon of shame—Jesus’ words reveal where his attention was.  He was not driven to justify himself or to cultivate the sympathies of the spectators. What little clairvoyance he could likely marshal in the midst of the throbbing pain and jeers of the crowd was directed to praying for their forgiveness and comforting the criminal dying next to him. What allowed him to live his last tortured minutes this way?  I would suggest his final words, where he commits his life to the Father, give us an insight into the repose that guided his life and even his last gasping breaths. He did not need to be on the right side of history because his Father would make history right. All the things necessary for this story to be redacted from the victor’s account of history are certainly there, yet it has probably been told more than any other for the past two thousand years.

There certainly is a place for telling the truth about injustice.  Jesus’ silence does not mean that all should be silent always, but it should be an option on the table.  Jesus’ example shows us that not all is gained by making sure others know of our suffering. Jesus was content to let his Father write a surprise ending to the story on Easter morning and for his followers to continue telling the story after that.  Because of this, a wider hearing was certainly gained.

The issue is not whether we should tell the truth about the injustices we might have suffered.  We certainly do not want to propagate lies. The questions confronting us are how we tell the truth and for what reasons we tell the truth.  In The End of Memory, Miroslav Volf notes that a false or embellished retelling of an injustice perpetuates injustice by making the perpetrators out to be worse than they actually are.  The temptation of one who has suffered, and Volf has personally, is to hurt others out of the hurt one has received. In a world where we feel the need to be first to claim the status of victim in order to win an argument or culture war, the pernicious desire to attack and defend can quickly become the subterranean motives behind our truth-telling, even stories of our own suffering.  Those who follow Christ have before them a unique example. The God-man was content to suffer injustice quietly. He sounded no trumpets, took no platforms, and started no resistance movements. Like a sheep before the slaughter, he was silent. Could we be content to suffer as quietly, full of faith that the One who Sees (Gen. 16:13) will know our story and judge rightly in the eschaton?  Could we suffer alone without needing others to be on our side? Perhaps we should only tell such stories after we can answer these questions in the affirmative, for only then are we willing to walk with Christ along the path to Golgotha.