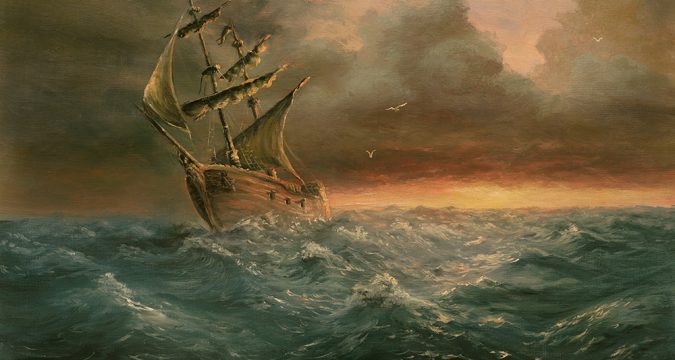 There is something true in Kierkegaard’s version of existentialism that summons the individual to step forth from the mob.  If one is to take up a religiously oriented life, especially faith in the order of the New Testament, it must ultimately come down to a personal choice and decision to follow the rabbi from Galilee.  For Kierkegaard, this choice, this leap of faith, was a subjective commitment.  Jesus Christ could not remain merely a historic figure constructed by what scientific and historical research could support.  Such objective study could only result in a historic probability but it could never deliver the true promise of Christian faith:  eternal happiness.[1]  The existentialism promulgated by Kierkegaard was an important corrective for its time, reinfusing the subject’s will and passion into what was otherwise perceived as a clockwork universe.  Humans were not just detached objective observers; they were meant to live, to will, and to choose.

The waters upon which we sail today still bear the stain of this existentialist river and thankfully so.  However, these waters also bear the color of other rivers and streams that have mixed in their own peculiar intellectual minerals and sediments.  Perhaps what is most important is not what these waters now contain but what they now appear to lack.  The idea that there is a reality or truth external to the self that could inform and guide the existentialist project has seemingly evaporated from these waters.  For many today, truth, especially truth about oneself, can only be found within.

Consider the following excerpt from my daughter’s reading book, which records a conversation between a girl who is trying to figure out what vocation she should pursue and her father:

“And how do you know which are the things you should try for?” [said the daughter].

“Well, this is a hard question for so early in the morning,” Dad said.  “Hmm, I guess it’s different for every person.  You have to know yourself what you can do.”

“No, no one can tell you,” Dad said.  “Only you can decide, because only you know who you are.”

This episode is quite surprising.  Here is a young girl asking for help and guidance and being flatly rejected for the parents are ultimately helpless in this sacrosanct endeavor.

There are several things that are wise and true about the parent’s response and yet, as we will see, something very concerning.  On the positive side, it honestly concedes that a parent’s knowledge of a child is not exhaustive.  The full depth of who someone is rarely, if ever, is plumbed even in marriage let alone in other relationships.  In addition, the ultimate decision of what a child should pursue vocationally is given to the child since it is her future.  On the negative side, however, the father seems to cut himself out of the child’s growth in self-knowledge and discernment too quickly.  Is there no longer a place for a parent to reflect back to a child and say, “I have seen you have interest in science and math.  Would you like to talk to Mr. Skillen about how he uses science in his engineering work?”  Just because there are parts of the child that might be hidden from the parent, one cannot thereby conclude the parent is useless in the child’s development as this father seems to concede.  Such comments and observations can be offered without dictating a particular future.  The child can still own the choices made upon this information, but anyone about to make a life-altering decision would want input from those closest to them.

Probably the most problematic thing, though, is that the father avers that only the child is positioned to know who she truly is.  This is, unfortunately, not true.  If the depths of the human heart are a mystery that no others can fully know, then why should we believe that we could exhaustively know ourselves or that we are the only ones who could know what lies therein?  Psychologists often talk about the different domains of self-knowledge with the Johari window (https://www.communicationtheory.org/the-johari-window-model/).  While there surely is a quadrant containing what one knows about oneself that has not been disclosed to others, there is another quadrant that comprises knowledge which is known to others about oneself but not known to one’s own self.  Common wording simply refers to the things in this quadrant as “blind spots,” things that we cannot see or refuse to admit about ourselves.  Regardless of why it is a blind spot, these things are still true about us.  If they are true, then our future success and flourishing will hinge upon them or else be sabotaged by them.  The point I wish to underscore, though, is that the only way we can come to know about these blind spots is through conversations with other people.  Who would be better able to see these for a young adolescent than one’s parents?  The missing element in the entire exchange is the fact that we are meant to be in relationships with others and that the process of self-discovery and growth cannot attain their maximum potential with a fully isolated self.  Unfortunately, the dialogue with her father leaves the girl peering down into her soul alone with no helping words to decipher figures in the darkness.

By cutting out the inherent human need for others in the journey, this story elevates some distorted form of individualistic existentialism.  Not only does this particular account diminish the human need for others in the process of growth and self-discovery, it lays a crushing burden on our youth.  Instead of enlisting others as aids in the process, the lone youth is forced to look down deep inside to find the passions and interests that will motivate her for a lifetime.  All alone on a sea of passions that rise and fall like the tide, some will no doubt be paralyzed by the daunting task.  Some who embrace the offered freedom will head down blind alleys that wise counsel would have had them avoid.  Other helpful guiderails might be torn up only to discover they were best left there in the first place.

I do not think we need to be lost on Existentialist Sea.  As Christians, there is a map of the seas so to speak to guide us.  God’s creation of the world, his positioning of humans within this world as image bearers, and his outlines for living the fullest human life comprise at least a generic if not a more intricate mapping of the seas.  This “map” has always been the key point of demarcation between the Christian existentialists from the atheistic existentialists.[3]  In fact, having some kind of “map” to the sea of life shapes how we choose to navigate it.  Rather than peering down into the abyss of our hearts, hoping to find some solid ground upon which to build an identity, in the gospel God gives us an identity as his beloved children, holy and righteous before him (Eph. 1).  This is not an identity that we have to attain through our good behavior, but one we receive because we are now united with Christ.  By being united with Christ, we are placed in a community, the family of God, that has been tasked with discipling and calling forth in people the fullness of who they are in Christ.  Together, we pursue the upward call of God until Christ is formed in us.  That should be enough to fill a life.[4]  That should give us moorings as we seek to navigate the churning seas of life.  We no longer need to be tossed to and fro.

[4] Intentional reference to Albert Camus’ “The Myth of Sisyphus.”